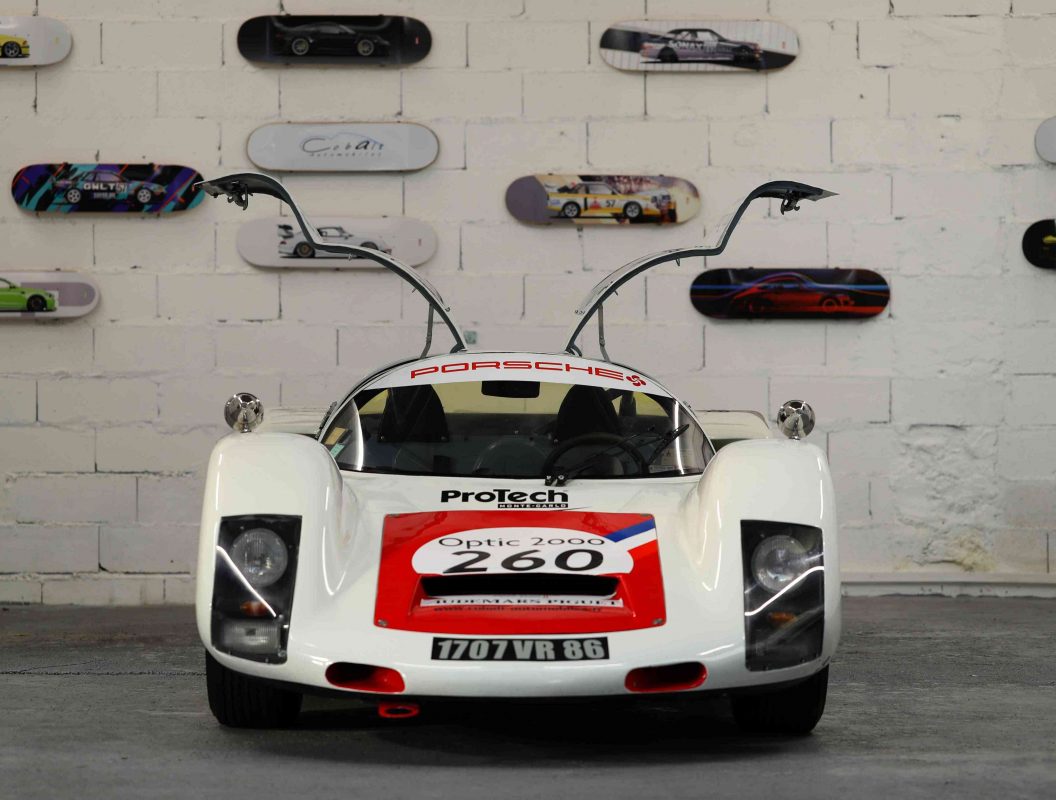 * Raced at 24h of the mans in 1966
* 1967 French winner of track championship
* One of the most large race history Porsche carrera 6
* A ticket to enter the best historicals competitions in the world (Le Mans Classic, Le Tour Auto, Goodwood …)
* Very competitive and reliable car

In 1965, the Porsche 904 GTS were regularly beaten by the Dino 206 in the mountain championship, so Porsche confided to his young development manager, a certain Ferdinand Piech, the creation of a new car. For a question of economy and time, some parts will be taken from the Porsche 904 (brakes, suspensions, hub carriers and 15-inch wheels) but a full freedom is left about the development of the chassis.
The choice of a fiberglass body and a tubular frame will be validated, and the weight gain will be 75 kg compared to the Porsche 904 GTS, containing the whole at only 620 kg.
The engine is a Flat 6 type 901/20 developing 210 hp with 1991 cm². Thanks to its aerodynamics worked and its reduced weight, the car is able of very good performance and a top speed of about 280 km / h, which was very fast given the displacement of the engine.
50 copies of the 906 will be produced in 1966 (+15 factory versions).

906 114 was ordered by its first owner (through Porsche Sonauto Dealer), Robert Buchet, a notorious driver who changed his 904 GTS for a more competitive car. At the reception, he brought the car at the start of the Montlhéry Coupe de Vitesse, which he win in April 1966.
He then took the start of the 24 Hours of Le Mans 1966, and stop at the 9th hour and 18th position.
For the rest of the 1966 years, the car took place in a dozen races including two victories.
906 114 will be involved in 14 events in the 1967 season and won 5 times (including the Magny Cours race). It won the French track championship.

In 1968, this time in the hand of Mr Finkel, the car will be engaged in 16 races of Hillclimb races including 5 victories which will him the 3rd place in the French championship.

In 1969, Dr. Bonnemaison bought 906 114 and participated in seven races (including two victories) before changing hands with Louis Cosson for the 1970 season. During this season, 906,114 will be involved in 14 races (including 9 victories) and will participate in the 1970 Tour de France auto. It will reward its driver of the title of French champion of Hillclimb race for the same year. Then the car changes hands and the pace of racing slowed in the 70s / 80s. More recently, and after a full restoration between 1994 and 1996 by the specialist Dieter Eissner, 906 114 has returned to the tracks with the participation in all major European historical races of notoriety (Tour Auto, Le Mans Classic, Goodwood, Targa Florio …) His current owner acquired the vehicle in 2006 and engaged it at the Tour auto in 2007/2008/2009 and 2011 and at Le Mans Classic in 2008.

In 2011, the engine and gearbox were completely restored by Crubilé Sport. The car has made since a last Tour Auto. It’s perfectly reliable and ready to run. This car, which has not stopped running since 1966, still has many original parts including frame, engine crankshaft, bucket seats or wheels … Perfectly documented, the history file we have include : expertise, original technical passports, invoices, administrative documents, correspondence and many historical photos and period articles to follow 906 114 throughout his career sports as well as to trace an interesting and consistent track record. The car is in its original configuration, and all its owners are identified since the origin.
A race car homologated for the road, it’s the starting point of the Porsche brand in competition, making it very important in the history of the brand. 906 114 is ready to hit the road, it will be the ideal and competitive tool to access the most beautiful and great historic races that will open its doors for its condition, its track record and its rarity. It will also be able to complete the most beautiful collections of cars for any demanding collectors.